In May 2008, I announced the première of my series of three Bb clarinet studies. I'm happy to share with you the recording of this live performance, featuring two amazing musicians: Petra Stump and Heinz-Peter Linshalm. 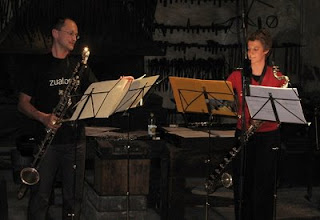 Petra and Heinz-Peter during their concert in Vienna (Austria) on June 13th, 2008.

The first of these pedagogical miniatures is a very simple melody to play with just the clarinet mouthpiece, to whistle, and to sing and play at the same time.
Here is the score for two clarinetists: the teacher and the student. 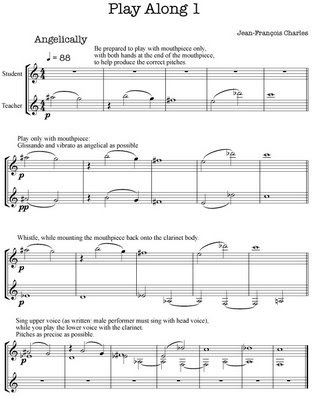 Singing and playing at the same time is less common on the clarinet than for instance on the trombone or the flute. I strongly recommend to listen to composer and clarinetist Evan Zyporin's "Tsmindao Ghmerto" (look for the title on the page, you should be able to download a mp3 version). It's a written solo for bass clarinet, to be sung and played at the same time. A great piece in a recital.

Beginning of January, I'll post the score for Play Along 2, stay tuned!