Showing posts from October, 2013
Show all

A couple of pictures from last week's concert with the Brest conservatoire's jazz orchestra and Chicago musician Douglas R. Ewart . The concert took place on October 20th, it was part of the fantastic Atlantique Jazz Festival . The jazz orchestra at the conservatoire is led by two great jazz musicians: trumpeter Philippe Champion and saxophonist Krystian Sarrau . The Brest conservatory 2013 jazz band Red Hills started with an improvised clarinet & flute duet Singer extraordinaire Zalie Bellacicco rendered the text beautifully At the end of the day, Douglas seemed pretty happy with the concert I was thrilled to share this musical moment with all of the musicians. Red Hills , the composition we performed, was inspired by mountains in Douglas Ewart's native Jamaica.
Post a Comment
Read more 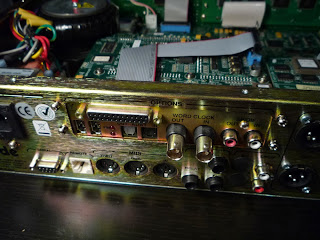 Eventide are well known for their harmonizers. The term Harmonizer was actually registered as a trademark by Eventide in 1976. The H8000FW is the latest rack harmonizer version (first one was the 1975 H910). The biggest problem in the design of this sound processing unit is that an internal battery is necessary for user memory to, well, keep user presets in memory. When you change the battery, all user presets are deleted (because of course, you want to change the battery when the unit is NOT powered!) Good news : the operating system and factory presets will still be there after a user memory reset. After backing-up user presets on a card (and copying everything on a computer & back-up hard drive, of course), I changed the dying battery. Here are a couple of pictures: Tricky: you have to carefully remove the Firewire/ADAT extension card to get to the battery. You have to be very careful too when you put the card back in place. If you want to change the battery in a H8000, H
Post a Comment
Read more
More posts