Showing posts from September, 2012
Show all

Madonna is the Miles Davis of pop music

Miles Davis picture from You're under Arrest - Madonna from Polari Magazine After attending Madonna 's show in Zürich, Switzerland, I couldn't help but think about the traits she shares with jazz genius Miles Davis . Both of them knew how to choose great collaborators. Steve Jobs used to say " A players hire A players ". Miles and Madonna are definitely A players. When the former chooses to work with Gil Evans on Sketches of Spain , Madonna chooses to record Patrick Leonard's La Isla Bonita . When Teo Macero produces '58 Stella by Starlight , William Orbit produces Ray of Light , and when Miles gets inspired by younger Marcus Miller, Madonna finds inspiration in the moves of dancer Lil Bucks. In his autobiography written with Quincy Troupe, Miles Davis says: " The very first thing I remember in my early childhood is a flame ." A fascinating thing about Miles Davis is the incredible inner flame which pushed him to go beyond what he knew, to lo
Post a Comment
Read more 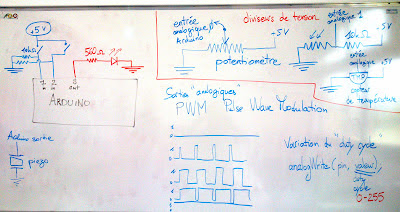 This Thursday morning: some theory and lots of practical work for the students in the Multimedia Masters Program at University of Franche-Comté. I had them introduced to the world of micro-controllers through the ARDX Arduino starter kit : the students had fun with LEDs, photo-resistors, temperature sensor, and more. I hope they are going to put this knowledge to good use with fun projects mixing physical computing and music!
Post a Comment
Read more

I just received Gunther Schuller 's memoir A Life in Pursuit of Music and Beauty . Gunther Schuller is an exceptional musician. I am not going to summarize his biography, since it already takes him more than 600 pages to tell the first 35 years in the book. Here is a short video where he's talking about Miles Davis' Birth of the Cool recording: I have been blessed to meet with Gunther and work for him during my time in Cambridge, MA. He has a great eye for score engraving. His experience as a performer, composer, and conductor taught him that the quality of music engraving has a direct influence on the use of rehearsal time. This is especially important when you are working with a full orchestra, of course. That's why he is almost picky with the placement of expression marks and other such details. When it comes to making parts layout very efficient for rehearsals, Gunther Schuller is very much like Karlheinz Stockhausen, whom I also worked for . Here is an excerpt
Post a Comment
Read more

A new semester is starting at the university of Franche-Comté, where I've been involved in a few changes in the curriculum of the Master in Multimedia, option Music & Sound . As I announced in February , we worked with the teaching staff to include new topics for "Master 2" students, especially theoretical work on microprocessors and practical applications at the crossroads of arts & technology with the Arduino platform . I'm very excited since two groups of students chose final projects using these technologies: A first group is going to work on a 21st century version of the Syhamo, Oscar Wiggli 's synthesizer reacting to its environment. A second group chose to work on a novel musical instrument with hardware inspired by a traditional flute - maybe connected to a smartphone... Music & 3D videos I invite you to watch the winner of the Spring 2012 Rhizome competition . In this event, teams of "Master 1" students create 3D videos, from the
Post a Comment
Read more
More posts