Showing posts from January, 2016
Show all

Nautilis at the Beaj Kafé 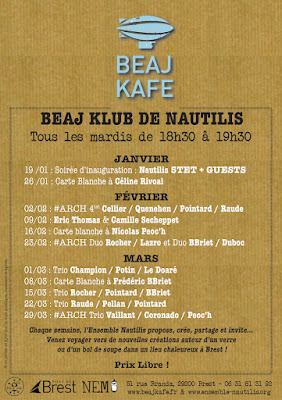 Every Tuesday! Do not miss the Nautilis concerts at the Beaj Kafé, a new coffee shop in Brest. Nautilis is a jazz collective of great musicians including Christophe Rocher (clarinets), Vincent Raude (electronics), Nicolas Poniard (drums), Nicolas Peoc’h (saxes), Frédéric Bargeon Briet (bass), Philippe Champion (trumpet), and Christofer Bjurström (piano). Tonight, accordionist Céline Rivoal is performing a beautiful recital of new music for accordion. I am accompanying her with live electronics for two short pieces (including Testo). See you there!
Post a Comment
Read more

I just wrote a couple of notes for the Electrocution 2016 festival: we are performing the première on April 2nd.Passage (2015-2016)for percussion & live electronics
Duration: 7 minutesPassage evokes the transition from one state of life to another. The passage may open new horizons, such as when the larva abandons his exuviae to take its dragonfly flight ; it may also hold a detoxification function, as when the crab gets rid of heavy metals while molting.
In this composition, new sonic horizons are revealed not only by spatialization & sound processing, but mostly by acoustic research on new instruments made from recycled materials. The pizza pan completed its transformation into an anaquaphone, the coffee cans turned into a cimbalom.
Many thanks to artist Henri-Pierre Deroux and multi-instrumentalist Van Hien Bui for the design and loan of novel instruments.Percussion partHere is the first page of the extended percussionist's part, with more space than the original global…
Post a Comment
Read more

Mikrophonie I - X moment is coming! 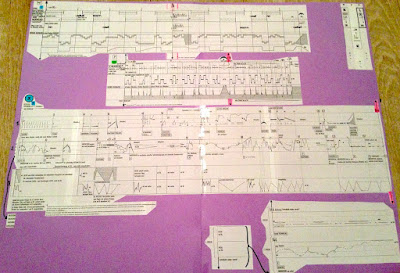 The score for Karlheinz Stockhausen's Mikrophonie I is beautiful, but not usable for a concert. My own Mikrophonie score is a gift from Stockhausen; I had to cut & paste copies to arrange a performance score with possible page turns: Next rehearsal this afternoon (first one took place last summer).
Post a Comment
Read more
More posts