Beyoncé is the... one

I got interested in Anna Teresa de Keersmaeker's choreographic work when I was a student at Strasbourg Conservatory. Around 2003, Marie-Claude Ségard, head of the conservatory, organized a visit to the dance school lead by the choreographer : P.A.R.T.S, in Brussels - I was invited and it was a great experience. At the same time, I and a couple of friends were playing Thierry De Mey's music: we performed a Maximalist! program during the international contemporary music festival Musica.

You can imagine my surprise when, on October 27th, aboard the Boston-NYC Chinatown bus, I came upon the following note in the People section of the New York Times: 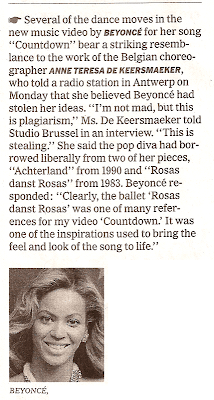 I must confess that, among all of the new music I've been listening to this year, Beyoncé's album 4

(sponsored link) ranks at the very top. Anchored in the tradition, she is also innovating, but as importantly, the production quality is up to high standards.

I was glad to read that Beyoncé completely acknowledges having borrowed from this choreographer, a famous one in the European modern dance community. If you haven't seen it yet, watch this split screen showing Beyoncé's work on the left, Anna Teresa de Keersmaeker's one on the right :

As you can see, the "sampling" tradition in music has been extended to dance here, and even to Thierry De Mey's original ideas for sets and film making. Beyoncé did not credit de Keersmaeker, but there is little doubt lawyers are gonna find an arrangement: hip hop artists have been crediting music samples for quite some time now.
For the record, you'll find below Beyoncé's original video Countdown: