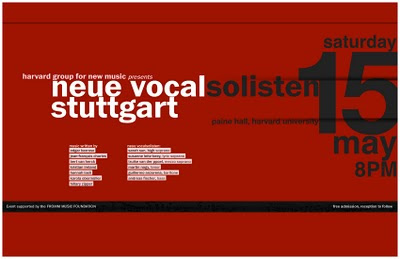 You are invited to the last concert of the 2009-2010 HGNM season. Concert is Saturday, May 15th, 8pm, in Harvard Music Department's Paine Hall. The Neue Vocalsolisten Stuttgart are performing seven new compositions, including my work Risorius, and new works by my colleagues:

I composed Risorius in 2005-2006 as the third part of the cycle Arc-en-ciel. Risorius is a facial muscle, which pulls the corners of the mouth laterally. In 2004, I started exploring the musical potential of laughter with Zygomatic, a composition for voice & live electronics. Both works are part of a long tradition of compositions using laughter, such as Wolfgang Amadeus Mozart's Magic Flute, the 1923 OKeh Laughing Record, or Karlheinz Stockhausen's Lucifer's Fury.
I hope you will enjoy the piece until the concluding fun(eral) lament. Risorius is dedicated to Malo.