As I said when announcing the premiere concert, the piece Bagict (15-16/60) is dedicated to both Ryan Banagale and Michael Cuthbert. Thank you for taking part in the 60/60 project!

Because both presents came at the same time, and Ryan and Michael are almost colleagues, I decided to compose a piece inspired by both objects. The Illustrated History of Magic suggested me to base the composition on the idea of transformation. In the piece, the transformation of a musical material into another is realized/improvised/decided live by the performers. From Milton Babbitt, I stole the series of twelve pivot notes used in the melody and harmony of Phonemena's first couple of bars.

I recorded the premiere performance on a minidisc (in Bien, Switzerland, on August 15th, 2008). The excellent performers were Yuji Noguchi, clarinets, and Vincent Daoud, saxophones. Here are the links to the recordings available on last.fm: 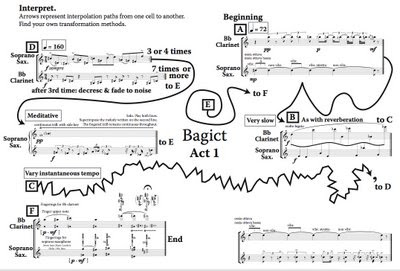 In the score for Act 1, you can see musical figures connected with arrows. The arrows represent interpolation, or gradual transformation, from one musical figure to the next. The performers choose their own way of interpolating between the written musical phrases.

In Act 3, the performers complete the score themselves. They write in all of the missing details and interpolation paths they want to play.

The Daoud/Noguchi duo was invited in the Fall of 2008 by the Edmonton Composers' Concert Society (now with a new name: Tonus Vivus Society). They gave this concert in Edmonton on October 25th, 2008. I was honored that they featured this composition in their programme Daoud/Noguchi Duo: …vers un théâtre du son…

...vers un théâtre du son... that's really a title that suits this duo: I wish you can listen to, and watch them soon!