I just finished a provisional version of Lapalu, a new work for viola and live electronics. In this composition, I used the musical formula technique.

Here is the manuscript of the Lapalu formula. You can read the four limbs of the formula, each inhabited by a particular musical character. I composed part of this formula after recording Garth Knox. I could then incorporate elements of his musical language. For instance, he ended the improvisation session with circular bowing, that he seemed to enjoy quite a lot: this is why I use this nice sound quality in the last bar.

First projection of the formula

On the next picture, you can see the how the Lapalu formula unfolds over the first section of the piece. In formula composition, musical material is not developed, but rather spread, unfolded. Each limb of the formula contaminates its character to the corresponding section. Each section contains one or more projection of the whole formula. Here, the first projection (first half of the "red" section) is not transposed, the subsequent ones are transposed. 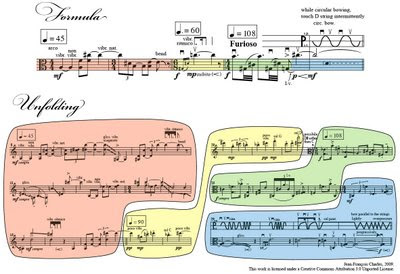 The formula as a model for the large-scale form

At a larger scale, the formula is projected over several minutes. The "bend note" becomes a "Fall" section, that happens to be a "live electronics" solo. 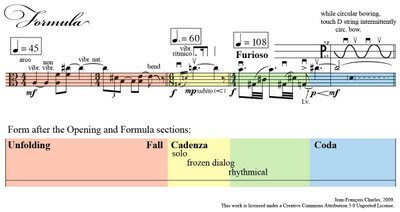 In Lapalu, the harmony is directly derived from the melody. Or was the formula composed after the harmonic progression? 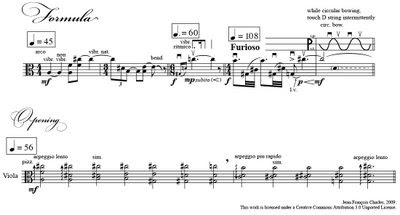 For more insight into formula composition, I recommend reading Karlheinz Stockhausen's presentation and analysis of his own music, for instance his Texte zur Musik, volume 5. And you may become convinced that Formula composition is just another version of total serialism.