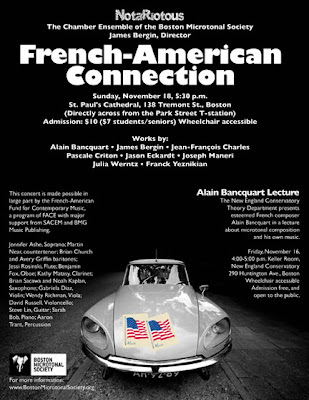 I am honored and excited that the Boston Microtonal Society included my piece Tilia for flute, violin, and cello, in the Fall concert of Notariotous (featuring Jessi Rosinski (flute), Gabriela Diaz (violin), David Russell (cello), and James Bergin (director)).

Music in the form of a tree

Like the tree, Tilia has roots, a trunk, and inflorescences twirling in the wind. I composed the piece in 2000 after a musical formula, designed as the musical image of a tree (click to enlarge): 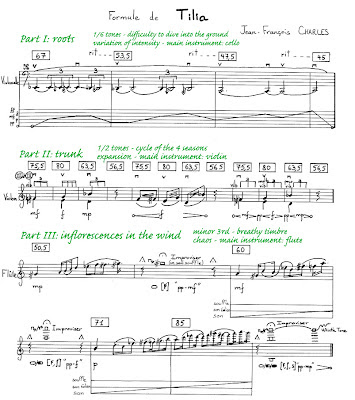 Here are the program notes:

Tilia spreads as the tree develops. The roots, meeting resistance, penetrate the earth little by little. The trunk widens in the rhythm of the seasons; Spring, summer, autumn and winter bring an additional ring to it. The wind blows in the foliage and makes the inflorescences whirl.

You will recognize the characters of the roots (from the beginning), trunk (from 3'48"), and inflorescences in the wind (5'41" to the end).

The program also features the music of: