Electroclarinet 5 is a composition for A clarinet & live electronics, written in homage to Igor Stravinsky.

I completed the clarinet part on May 11th, 2013.
The score is built around four (circled) motives directly inspired by Stravinsky's works: the Three Pieces for Clarinet solo and the Piano-Rag-Music. 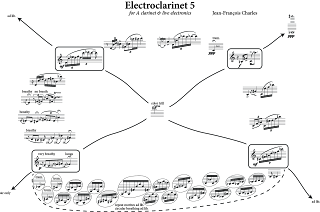 The performer plays around the score, following paths of her/his choice. Routes from one basic motif to another are either written (circle), or to be improvised (on black lines). When the clarinetist adventures outside the box (black arrows), s/he starts again from any place in the score (including from another place outside the box).

The live electronics part uses advanced playing mode recognition to adapt sound processing to the clarinetist’s improvisation and interpretation. More on that later!