In the Fall of 2009, I was a Teaching Fellow for Professor & Pianist Robert Levin's course Chamber Music from Mozart to Ravel.

In the syllabus, Pr. Levin included the study of Claude Debussy's Cello Sonata. Along with many students, I found this rebel piece wonderful. So, I decided to compose an homage to Debussy for the Harvard Hydra Winter 2009 concert. I entitled this new work for contrabass clarinet and electronics Electroclarinet 2. This composition is directly inspired by the second and third movements of Debussy's Sonata for cello and piano. 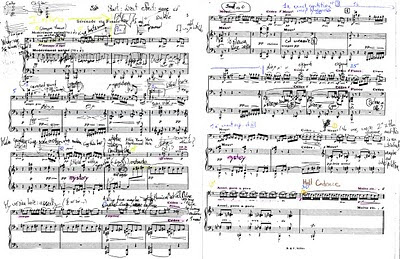 The Cello sonata was and remains a modern piece of music. In the first movement, you can hear a D dorian / Eb modal juxtaposition that we will later associate to Miles Davis' Kind of Blue. But to find such adventurous moves as the ones in the second and third movements, we may have to study the music of the radical artist John Zorn and his friends of Naked City. 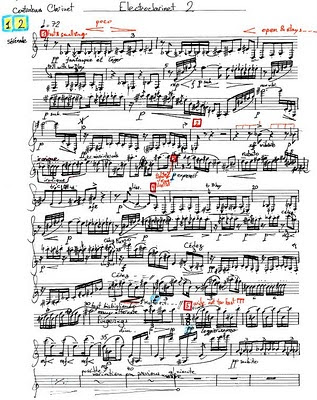 Electroclarinet 2 - First page of the manuscript.
That was also my performance score for the première.

A microtone is an interval smaller than a semitone. When composers use microtones, they play notes "in between" the black and white keys of piano (well, with a fluid piano, you can actually play quarter tones and micro tones, but I'm talking about a good old well-tempered piano here).

Playing with microtones is a very old technique on wind instruments, and clarinet players usually enjoy playing many types of microtones. When transforming the cello sonata into Electroclarinet 2, I used some of the microtonal possibilities of the contrabass clarinet to extrapolate from Debussy's original sound. Here are a few passages that you can check out on both the annotated Debussy score and my manuscript: