Dudley House is Harvard's house for graduate students and non-resident undergraduate students. It is a great place to make friends, grow interdisciplinary ideas, and have a coffee at Café Gato Rojo.

As one of the house music fellows, I am proud to announce the first Dudley House Music Festival. It is taking place this Sunday, May 10th, 2009 in Dudley House Main Dining Hall. 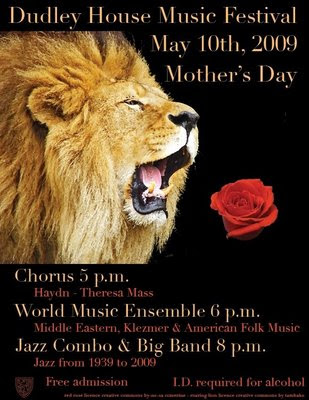 The Chorus will kick off the event with Haydn's Theresa Mass conducted by Michael Barrett.

Then, the World Music Ensemble will perform music from around the world, including original arrangements and new compositions. Multi-instrumentalist Behtash Babadi is the musical director.

The jazz combo's philosophy is to play creative jazz and have fun. By bringing in new arrangements of old music, or brand new compositions, we try and keep the spark of jazz well alive.

I am very happy to feature in the Big Band program the music of great composers. Duke Ellington, "of course", will be represented with two works. But we will perform as well unpublished works by Bob Mintzer and Mathias Rüegg, two majors big band leaders in the United States and in Europe.

See you on Sunday! You will never regret.