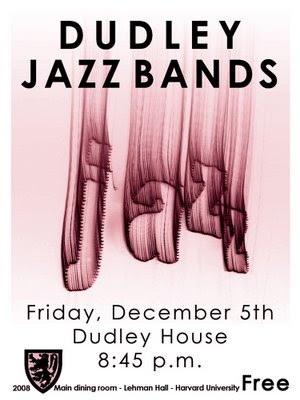 Picture for poster after Jazz by Geoff Coe.

Refreshments will be served.

If you live in the Boston area, get ready for a hot Jazz night in Dudley House, even if it's cold outside!

Our Combo will play swinging arrangements in different styles, from jazz waltz to rhythm'n blues. Alan Lenarcic has lead the rehearsals with brio, and the tunes will be:

As during each concert since last Fall, new music will be created: this time, the big-band's lead trombonist Ethan Fenn composed a new piece for a cool ensemble of winds, bass and drums. Looking forward to this world première!

Our full big band will explore a repertoire including major American composers, from the eternal Duke Ellington to 2004 and 2008 Grammy Award winner Maria Schneider.