One week ago, on Monday, October 13th, the outstanding violist Garth Knox was the guest of the Harvard Group for New Music.

First, he talked about the history of the viola and its techniques, while constantly playing examples. Quite a great survey of the viola repertoire: Bach, Mozart, Beethoven, Brahms, Schumann, Berlioz (did you know that Paganini asked Berlioz to write for the viola?), Hindemith, Bartok, Stravinsky, Ligeti, Xenakis, James Dillan, Murail, Grisey, Kurtag, Berio, and Sciarrino. Finally, he presented eight fun études: Viola Spaces. He composed them to help teach contemporary techniques.

In the afternoon, we had a chance to record Garth Knox in the Huseac Studios: Edgar Barroso and myself seized the unique opportunity. Here is the score I had written for the occasion: 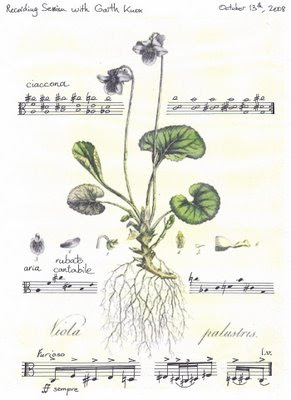 I also asked him to play in reaction to these four propositions:

The session was fast-paced and went very well. Garth Knox shared with a communicating enthusiasm his creativity and experience. Thanks to Professor Hans Tutschku who helped us set up the microphones and ProTools session in advance.

This event took place as a first meeting before Garth Knox comes back for a concert on Saturday, February 14th, 2009 in Cambridge. Several new works will be composed for him. My contribution will be a work for viola and live electronics, and the title will be: Lapalu.