The Center for New Music at the University of Iowa is honored to present a recital by guest artist Marco Fusi: this Tuesday, April 19, at 7:30pm in the Voxman Concert Hall.

The program includes David Gompper's Nuance for solo violin, and the US premiere of Yu Kuwabara's Water Voice / Bai and Dharani. Marco Fusi is also going to play two pieces for viola d'amore and live electronics.

Tesseræ was composed by composer Christophe Trapani for Marco Fusi. It draws inspiration from several traditional bowed instruments: the kemençe from Istanbul, the Indian sarangi, and the lyra from Crete. This piece was recorded and just released on Christopher Trapani's album Horizontal Drift.

When Marco's recital was confirmed, I decided to write a piece for him and thought it was a superb opportunity to get to know the viola d'amore. Marco shared with me great resources about the instrument, like The Virtuose Viola d'Amore. 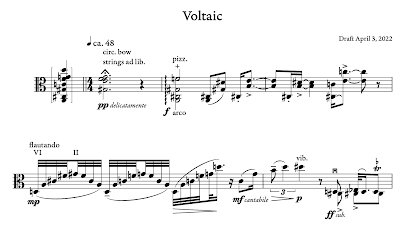 In this piece, I set the viola d'amore sound developed by Louis-Toussaint Milandre and Henri Casadesus in a dialog with live electronic processes developed in the 20th and 21st century. The 7 notes bracketed at the beginning of the score (above) show the tuning of the strings. I am not asking any specific tuning of the sympathetic strings, leaving the choice up to the performer. In the tradition, the piece includes both written and improvised parts.

We hope to see you at the concert! Note: this concert was also announced in a recent profile published in the Dialy Iowan: A Composer of Colorful Electrons.