The Shepard Risset Synth is a Max for Live instrument designed to play Shepard tones and Risset glissandi live with a MIDI keyboard. You can also easily re-create auditory illusions such as the Tritone paradox.

Although the idea that pitch can be presented as the combination of height and pitch class (or chroma) has been around since the 19th century, Roger Shepard was the first to generate tones giving the impression of a circular perception of pitch. He generated the sounds in 1964, when he was working at Bell Labs: he used music synthesis software created by Max Matthews.

In 1967, Roger Shepard and Edward Zajac made this film, which presents a dot moving on Penrose stairs synchronized with Shepard tones:

The original video is accessible from the Bell Labs archives.

To achieve the illusion, Shepard applied a constant spectral envelope to a series of tones. Each tone consists in the sum of 10 sine tones spaced by octave intervals: 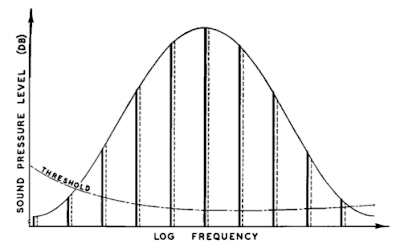 Shepard drew a bell shape for the spectral envelope applied to all tones of the scale. When a tone is transposed one octave up, it has the exact same components as when it is transposed an octave down (From Circularity in Judgments of Relative Pitch, 1964).

French composer Jean-Claude Risset worked at Bell Labs in 1964-65. Building on Shepard's work, he created the first glissando version of the circular tones. He included a glissando going down endlessly in his composition Little Boy, to illustrate the imagined mental collapse without bottom of a pilot for a Hiroshima reconnaissance mission.

With this synth, you play glissandi automatically as soon as you play legato on your MIDI keyboard. That means that if you press a new key while keeping the current one pressed, you will glide from the first to the second note. This is a classical behavior for a monophonic synth. Adjust the glissando speed with the Glide dial.

Diana Deutsch created numerous auditory illusions. You can easily re-create one of them with the Shepard Risset Synth: the Tritone paradox. On a Shepard Tone synthesizer, play one note then the note a tritone apart. Ask different persons if the interval is ascending or descending. Repeat the experiment, starting on different notes...

In his device to make Risset Glissandos with Max, David Davidson uses a fixed cosine shape for the spectral envelope. The Max for Live Shepard Risset Synth gives you more flexibility: you can adjust, in real time, both the center frequency and the resonance of the Shepard filter.

You can easily adjust the resonance of the Shepard filter: here, a more selective filter on the left, a flatter curve on the right.

Traditional Shepard Tones are made of sinusoids separated by octave intervals. With this synthesizer, you have two ways to make the sound richer. First, you can use the Sine Bandwidth dial (top left), to smoothly vary the oscillator from a sine wave to noise. Second, you can add some output distortion with the Drive dial (top right).

Shepard tones made with filtered noise oscillators (left) or with soft saturation added to the traditional sinusoids (right).

I hope you enjoy this synthesizer, whether it is to play with auditory illusions, to produce new beats in Ableton Live, or to perform live.