Here is an inspiring Timbre Map for Strings drawn by Composer Trevor Wishart. He presents different classes of sounds and connects them in a graphical way recalling the mind map technique: 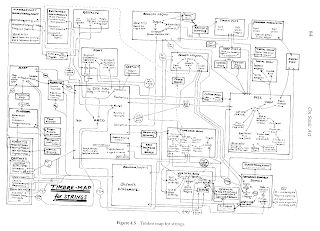 This map reminds me of how Helmut Lachenmann classifies sounds and sorts them along different types of scales. This thinking mixing timbre and instrumental gesture can be used in many different contexts.

I copied this fascinating drawing from Trevor Wishart's book On Sonic Art. Another great read is Audible Design. Find more information about Trevor Wishart's work and writings on his web site.

Think about an instrument: what would your timbre map look like?

To listen to parts of this timbre map - and surely some sounds not included on this map, make sure you come to the JACK Quartet concert on Friday, December 6, at 7:30pm in the Voxman Music Building. These wonderful musicians are playing music by Sky Macklay, Luca Francesconi, Helmut Lachenmann, and more!