Is the Serpent an Obsolete Instrument?

I am featuring the serpent in my current composition project, so I've been quite intrigued to see that Forsyth actually mentions the serpent in his great Orchestration book (amazon link) - I often recommend the string chapters to student composers. Here is what Forsyth says about the serpent (bold underlining mine):

No. 44. Obsolete Wood-Wind.
The Serpent.

The Serpent, as we have already explained, was the predecessor of the Bass-Horn, the Russian-Bassoon, and the Ophicleide. It was really the bass of the old Zinke or Cornet à bouquin, the instrument which supplied the normal treble-part to the medieval Brass-band. All these instruments, whatever the material of their tubes, employed the same methods of tone-production and of scale-variation–the cup-mouthpiece and the laterally pierced holes.

Originally the Serpent was keyless. It was merely provided with a series of six or eight finger-holes. In the later part of the eighteenth century, however, two keys were added allowing a slightly better disposition of the holes and consequently improving the intonation; the remaining finger-holes were finished-off with brass rims. About this time it secured royal patronage and became a recognized member of the Military Band.

The instrument was normally held vertically in front of the player. This was awkward for an infantry bandsman when marching. He could either play or walk: he could not do both at the same time. Acting on a royal suggestion, however, bandsmen began to carry their instruments sideways, and, though even with this added comfort their mental state cannot have been enviable, the change was reckoned epoch-making. 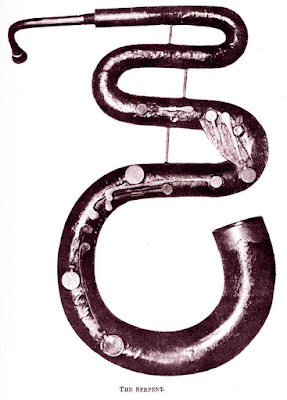 In England Serpents seem to have been always made on the same model, but in France, where the "Serpent d'église" represented our pattern, they had another standard instrument, less cumbrous and therefore more convenient for military use. This instrument was commonly known as the "Serpent militaire" or "Serpent d'harmonie."

In the early part of the nineteenth century the instrument's tonal inequalities and its deficiencies of intonation had become more than even the men of Waterloo could stand. The old finger-holes were abandoned; the position of the holes was corrected; and a complete set of huge metal keys like flappers was provided. It is one of these comparatively modern and elaborate Serpents, fit for either military or civilian duty, which is illustrated on Plate XI. The student will have no difficulty, after was has been already said with regard to this special instrumental family, in making out the details of the illustration without further explanation. The material used in the manufacture of the Serpent was wood covered with leather. A large cup-shaped mouthpiece of metal was used, and, as may be seen from the picture, the whole instrument presented the appearance of a dishevelled drain-pipe which was suffering internally. [...]

In tone it seems to have been an instrument in which the early Christians might have delighted. Berlioz speaks of its "lugubrious poetry" as being fitted for nothing but the plain-song of the Dies Irae, and mentions its "frigid and abominable blaring" in terms that evidently recall his own early sufferings when he assigned it a part in the Resurrexit of a Mass.

For years the Serpent was highly popular in French church­ circles. It has, however, long since severed that connection, and now leads a respectable secluded life among the mermaids and stuffed alligators of local museums.

Is the Serpent an Obsolete Instrument?

What do you think?