Cycling74 just released Max 8, the new version of the graphical programming environment for music, video, and more generally interactivity with new media. I won't tell you about all of the new features (multi-channel objects and patch cords, etc.), you can read that on their web site. Rather, I'll celebrate with a picture I took when I attended the first Expo 74, in San Francisco, in 2009. 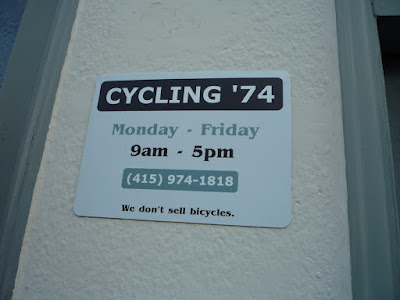 Yes, at this time, cycling74 had offices in San Francisco!

An interview with David Zicarelli

Here are a couple of sentences from an interview with David Zicarelli, cycling74's CEO. I believe the interview took place in 2001. I find reading these sentences so enjoyable, I hope it will make you happy as well!

Are you surprised at the affection that users hold for Max?

In order to get anything out of the program, you have to get into it in a way that demands a certain level of commitment. In many situations in life, commitment and affection are found together.

What version of Max is now the most stable or bug free?

I think 3.5.8 is pretty good. It never crashes on me, but that's not saying much, since my Max habits are so ingrained that if it did crash, I would have fixed it long ago. There are still a few problems with the timeline object, but a lot less than they're used to be. Its timing is much better now than in 3.5.

Given Apple's shaky condition, do you see a future port to Windows?

It's more likely than porting Max to Rhapsody, until someone convinces me otherwise.

For more fun, and especially to know more about the infamous Zicarelli Whisk Synthesis Technique read the keynote David Z gave for the International Computer Music Conference in 2001.