During the Thanksgiving break, I watched on PBS the whole Soundbreaking series. 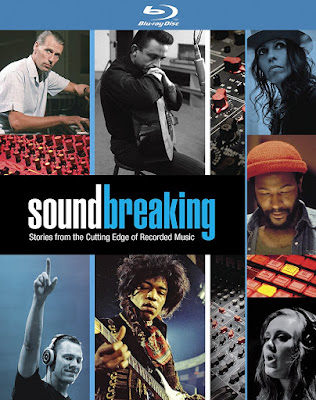 This great show, subtitled Stories From The Cutting Edge Of Recorded Music, sheds light on the process of record and music making, through eight episodes:

Here is the official trailer:

Precisions about the Talk Box

I found just one piece of incorrect information in the series, when the great Ben Harper describes how the Talk Box works. I have been teaching a course called The Spectral Nature of Sound at the University of Iowa, and I love to introduce the students to the Talkbox before studying other voice-processing machines such as the analog vocoder, the phase vocoder, a.o.

In the episode about Voice, the Human Instrument, Ben Harper shows a great Roger Troutman excerpt, and says that the box sends electrical current down the throat of the musician. This is incorrect, of course: the tube going into the musician's mouth is made of plastic, it doesn't conduct electricity. Most importantly, the principle of the Talk Box consists in feeding the sound itself, air vibration, into the mouth (in Roger Troutman's case, it's the keyboard sound). Then, this raw sound is filtered by the mouth itself: the musician shapes his/her mouth when whispering the different vowels, thus creating different formant filters, and making the keyboard sound like different vowels. It is not electronic or electrical sound processing, but physical, acoustic sound processing.

Ben Harper concludes in saying that Autotune sounds exactly the same as the talk box, which is not true: these are different ways of processing vocals, which are meant to sound different. Anyway, even with this errors, the series is one of the best documentaries about music making in the 20th century. Make sure you watch it!

The video is available on amazon: