On Monday, November 17th, I'll be performing in Helsinki, in the beautiful "Black Box" space at the Sibelius Academy, during the MuteFest'14 electronic music festival. Information is also available here, in Finnish. I'm looking forward to meeting the academy's dynamic artistic community, as well as cellist Émilie Girard-Charest, who is performing on Monday, too. 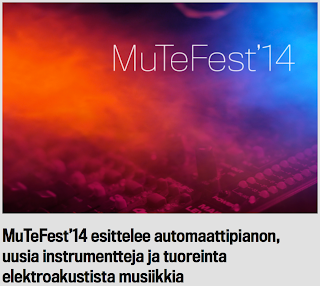 Electroclarinet 5 is a composition for clarinet & live electronics, and an homage to Igor Stravinsky.
The score is built around four motives directly inspired by Stravinsky's Three Pieces for Clarinet solo and Piano-Rag-Music. The performer plays around the score, following paths of her/his choice, or adventuring out of the suggested paths. The live electronics use audio signal recognition to react to the clarinetist’s improvisation and interpretation. Both the musician and the electronics keep adapting their sound production to the music actually heard.
I first envisioned this piece after the Piano Sonata – a work first published as rolls for the Duo-Art reproducing piano: Stravinsky composed for a traditional instrument augmented through technology.
Duration: ca. 5 minutes.

Electroclarinet 6 is a composition for bass clarinet & live electronics, in three movements.
The first part consists in the exploration of a stretched out sonic texture, where the clarinet tones aggregate and dissolve.
During the second part, hoarse drops and raspy oscillations reveal other facets of the same sound material.
The third part gives way to a melody from an imaginary folklore unfolding over a vulnerable landscape.
Duration: ca. 15 minutes.