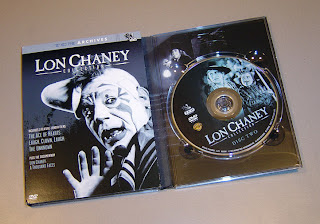 Plane Mix is the 9th minute of the 60/60 interactive composition project.
Many thanks to Cécile Pécheux for her participation and her present: a great DVD set

dedicated to Lon Chaney, The Man of a Thousand Faces.
Both Cécile and I have been struck by Tod Browing's The Unknown with an original soundtrack performed live by ARFI's Marmite Infernale. I discovered this ARFI show (called Tragédie au Cirque) during the festival Un Doua de Jazz 1994. That was an extraordinary experience, as well as my first contact with Maurice Merle. I strongly recommend to watch this movie, even if it will lack ARFI's powerful soundtrack!

). Then, I composed the soundtrack. Enjoy!